3:58 p.m., I sat on a bus, without my recording gear, fidgeting in my seat as the returning 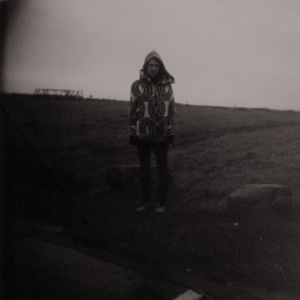 group from the Blue Lagoon drove through the back streets of Reykjavík, Iceland. I was late for my 4:00 p.m. interview with composer Ólafur Arnalds at Harpa Concert Hall and Conference Center. So naturally, I was freaking out. I needed to get this interview, and didn’t want to seem unprofessional by running behind. It wasn’t until I grabbed a cab back to my hotel to grab my gear that I was shaken out of my panic by the cabbie, who informed me that Icelandic artists and people are on their own time and won’t mind you running late for anything. My kind of people.

4:30 p.m., I made my way to the first floor bar at Harpa where I met Ólafur after his soundcheck for that evening’s performance in the Norðurljós Hall on the second level. As he finished his lunch, I set up my equipment, began to think about my questions and then let the tape roll.

Step aside Barney – there’s a new singing dinosaur in town. Totally Enormous Extinct Dinosaurs is an electronic act involving dancing Dino-clad women and some sick apparel. Grab your headdress, strap on a tail, and get down to the beats of Orlando Higginbottom. 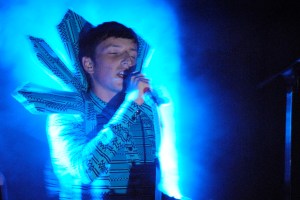 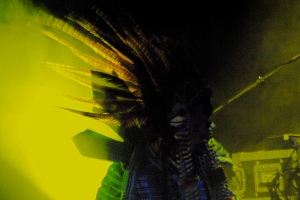 Today I missed the breakfast at the hotel because I woke up too late.  However, that was 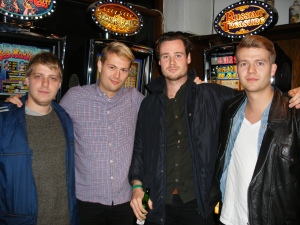 OK because my first meal of the day was fantastic.  Believe it or not, I have never eaten lobster before.  That is until this trip.  I had it for the first time yesterday at Tapas Barinn restaurant in Reykjavík.  Today I went to a restaurant called The Sea Baron, where I had their famous homemade lobster soup.  It was delicious and comes with a basket full of bread and butter.  On a cold and rainy day, it doesn’t get much better than that.

The first performance I saw was Ólafur Arnalds.  One word to describe his music is simply: beautiful.  The combination of him playing the piano with the addition of his string players creates some of the most soothing music I’ve ever heard.  Afterwards I went to Gang Related’s performance, a band I interviewed earlier in the day.

After getting soaked in the persistent rain here in Reykjavík, I arrived at Amsterdam venue.  It’s a bar with a smaller performance space.  I sat down at the bar, turned my head around and saw Albert and Jón sitting at the table in back.  They were waiting to go onstage, and had to start a little late because another band was having sound check problems.  According to Gunnar, all of the bands that performed at this venue yesterday sounded bad because they were having audio problems.  The power also went out a few times yesterday because they had all of the equipment plugged into one outlet.

Before Gang Related started playing there weren’t many people inside, but as soon as they began the place filled up.  They were fantastic!  The rhythm and feel of their music is very addicting.  They only played a few songs because they started late due to the earlier problem.  I didn’t want it to end because I was enjoying their music so much.

The best part about getting to know this band is the fact that they are so nice.  They are incredibly down to earth and humble.  Any question I had, they answered.  We talked about everything from their style of music to eating rotten meat, and to top it off, I heard an incredible performance from a great group of individuals.

Below is a sneak peak of my interview from Friday with vocalists Gunnar and Albert at Café Paris in Reykjavík. Stay tuned for a fully produced interview soon.

So three days of little sleep have begun to take a physical and mental toll on me.  We started the day off by heading out to the otherworldly Blue Lagoon for a bit of “relaxation.” Believe you me, those were the best 20 minutes of relaxation I’ve had in a very, very long time, but while the rest of the group stayed and enjoyed this geothermal wonder, I was back on the bus heading for the beautiful new venue Harpa, in Downtown Reykjavík, for an interview with Composer Ólafur Arnalds after his sound check for that night’s performance.

would be. He was very friendly and at points very soft-spoken for someone whose music is powerful and loud in its own unique way. We discussed everything from his start in music; his life as a rock and punk drummer as well as his brand new record “Living Room Songs” released just a week before the Airwaves festival kicked off.

After we concluded the interview, I began to wander the streets of Reykjavík like I had done for the previous two days and made my way back to the hotel to rest up for a few hours before heading back out to the show.

Harpa in itself is a place of immense modern beauty, and to see the performance Ólafur gave in this new building really fit quite well. Arnalds took control of the audience from the very first note by starting his set with “Þú Ert Sólin,” “Þú Ert Jörðin,” and “Tunglið” from his last LP …And They Have Escaped the Weight of Darkness, moving from one beautiful arrangement to the next in seamless succession, and using stunning light flashes that would sink up with the electronics, and beautiful projected backdrops of birds, fishing ships and a mobile with whales, birds and other things that were uniquely Icelandic. Arnalds fit in songs like “Fok” and “Haust” from his 2008 release Variations of Static, along with closing the show with “3055” from his 2007 debut Eulogy for Evolution.

The only problem I had with the set was it wasn’t long enough. I know, I know, it’s a festival and you need to fit all the artists in. But when you give Ólafur Arnalds more than a 40-minute time frame to show you every trick up his sleeve, he will destroy you – in a good way! Well his music will at least, but you get the idea.

Ólafur Arnalds at Harpa in downtown Reykjavik, Iceland was the highlight of my trip to

Iceland Airwaves. He’s an amazing performer and composer, and an extremely nice human being. You need to experience Iceland and all the amazing music that comes from this tiny island country in the Northern Atlantic because it will change you in more ways than you can count.